From the 17th to the early 19th century, and occasionally since then, books might be issued ‘on subscription,’ to solicit orders in advance of publication from subscribers attracted by a preliminary proposal. A printed list of subscribers’ names would often appear in the published work. The first known subscription list is that for the second edition (1625) of John Minsheu’s Guide into Tongues (SPEC Knowsley 349/oversize but without the list of subscribers).

Books whose publication was financed by subscription typically included particularly expensive books (for example highly illustrated books), specialist works (for example scientific and musical works), privately printed books, or special copies (for example, ‘large paper’ copies printed on a larger size of paper) making up part of an edition. The response to the subscription helped gauge the market for the work prior to publication and acted as a guarantee for the bookseller’s outlay on publication costs.

The lists of subscribers in the published work were often arranged hierarchically, giving the most eminent names first, and might include addresses and occupations. William Enfield’s 1773 Essay towards the history of Leverpool included views and a plan separately so subscribers could choose which parts of the work they wanted.

‘Endleaves’, or ‘endpapers’ are the first blank leaves of paper you come across when opening the book, and the final blank pages at the end. Found between the front or rear of the main textblock and the front and rear covers of the book, then, they are intended to protect the first leaves of text. The ‘paste-down’ is the half of the first sheet of endpapers which has been  adhered to the inside of the boards or cover of the book (literally, pasted down). Endleaves that are not pasted-down to the cover or boards are usually described as being ‘free’.

Paste-down is a useful term to know because it appears regularly in catalogue records. This is primarily because the paste-downs of a book are often where we find a number of interesting features – such as ownership inscriptions, bookplates, bookseller’s labels, previous classmarks – which have been added after publication and help to tell the unique history of that particular book (to use another ‘p’ term, we call this the book’s provenance).

Another reason paste-downs may be of particular interest is that they can sometimes feature coloured or patterned paper:

Three items from Special Collections & Archives have been included in a new exhibition at the Museum of Liverpool, which explores the history of Liverpool’s Royal School for the Blind and the experiences of generations of its students.

The School, the first in Britain, was founded in 1791 by Edward Rushton. Born in Liverpool and apprenticed as a sea-boy at 11, Rushton contracted an eye infection on board a slave ship, an experience which left him both blind and with an interest in radical political causes. 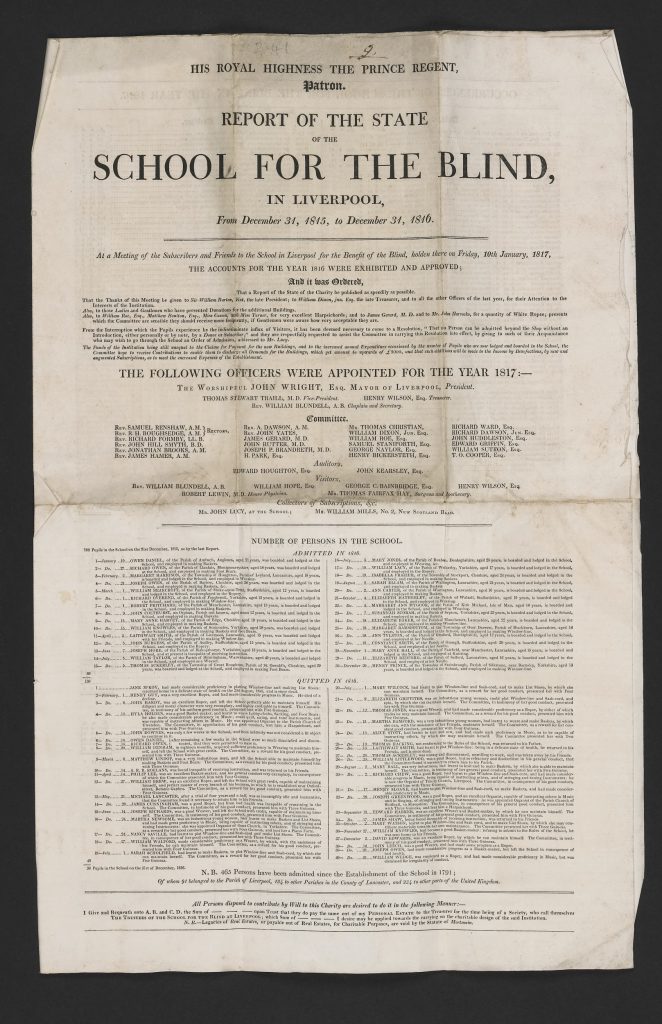 Report of the state of the School for the Blind (Liverpool, 1817), SPEC Knowsley Pamphlet 241. Image courtesy of the Museum of Liverpool.

‘The Blind School: Pioneering People and Places’ is one of three exhibitions curated by History of Place, a national project run by Accentuate, which explores 800 years of disability history through eight different sites around the UK.

A group of volunteers working on the Heritage Lottery-funded project visited Special Collections & Archives as part of their research in 2016. The group consulted a number of items from the collection and later selected three items to appear in the final exhibition, all printed in Liverpool – An unselfish life: sermon preached at the Blind School Chapel (1878);  Report of the state of the School for the Blind (1817); and An address to the benevolent founders of the Chapel for the Blind (1828).  The books are displayed alongside objects, spoken stories and a film made with visually impaired and blind students from St Vincent’s School in a narrative which challenges people’s attitudes towards blind people, both past and present.

The exhibition includes audio description, Braille, British Sign Language interpretation, and multi-sensory features, and is open at the Museum of Liverpool until April 15th 2018. 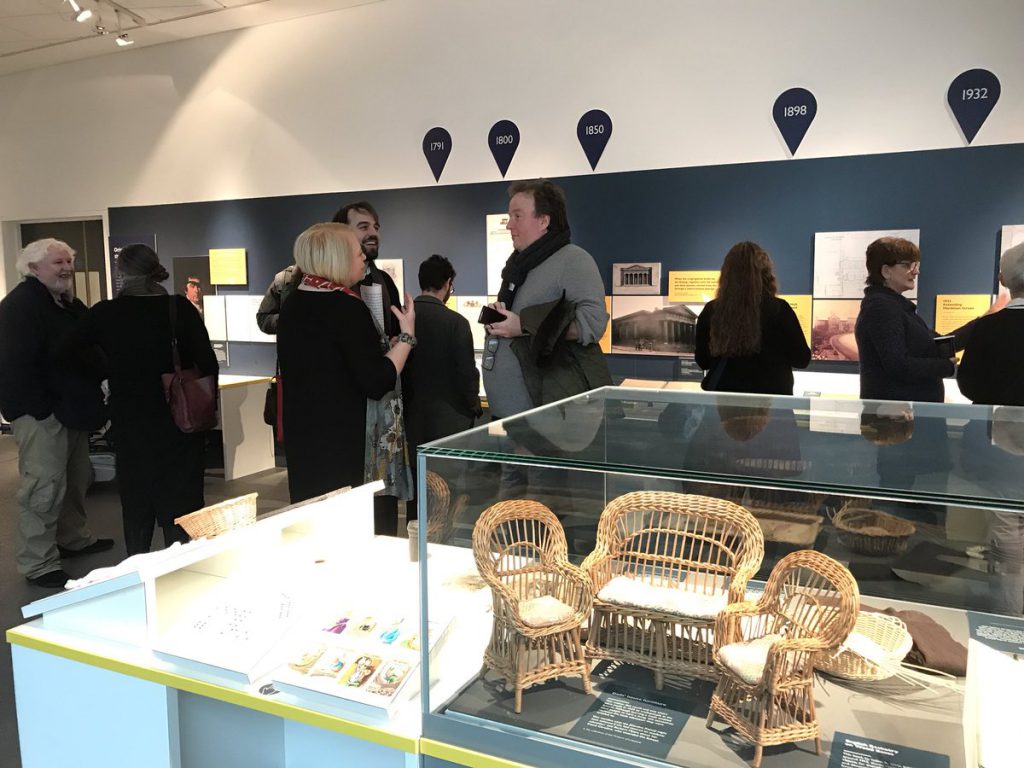 The launch event on 25 January 2018. Image courtesy of the Museum of Liverpool.

In keeping with World Health Day on the 7th of April, we have selected a range of printed material from Special Collections that provides advice on health and wellness, from the 17th century to the 20th century.

The Treasury of Hidden Secrets

How would a 17th century English housewife monitor the health of herself and her family? Homemade remedies made from flora were popular, as shown in the below pamphlet (1653). For instance, wormwood was (and still is) used frequently to settle illnesses of the stomach. 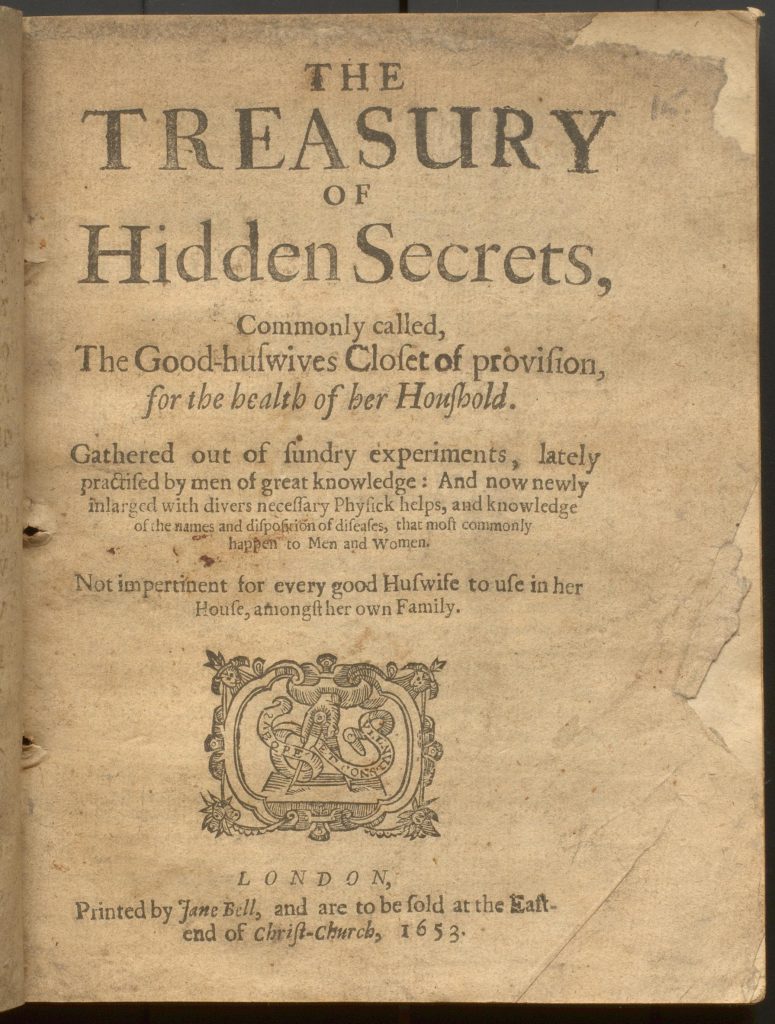 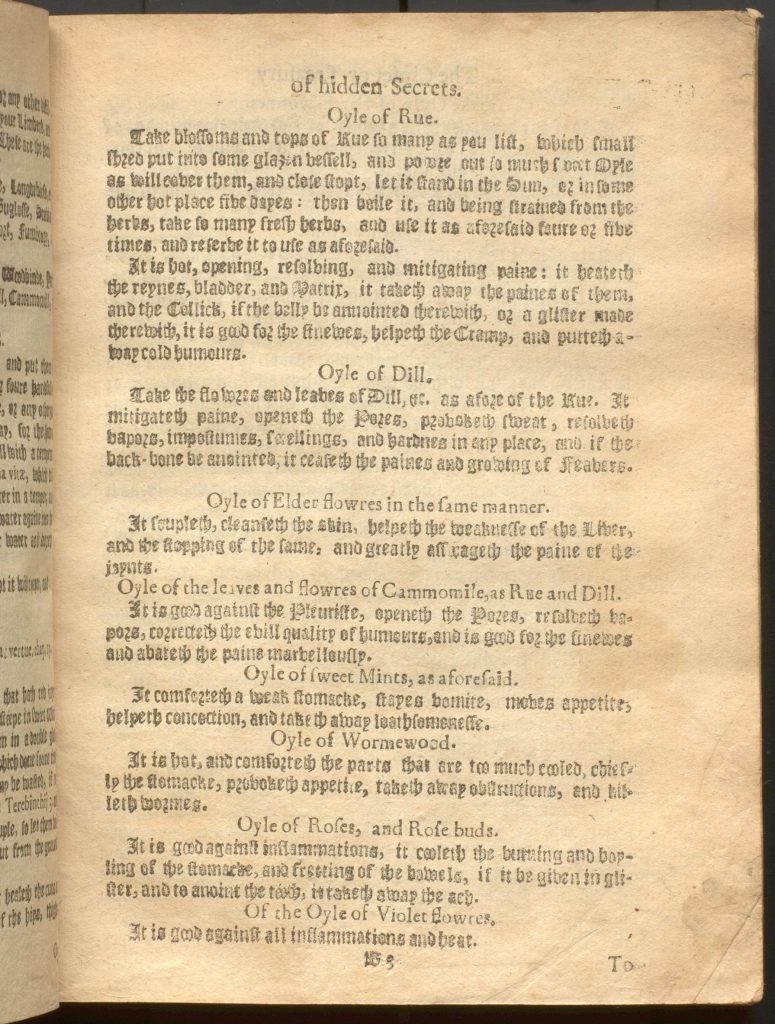 An Essay on the Gout

Among the elites and aspiring middling sorts of the 18th century, taking the waters at Bath was considered an excellent method of promoting one’s good health. The physician George Cheyne published his work, An Essay on the Gout, With an Account of Nature and Qualities of The Bath Waters (second edition) in 1720. Despite suffering from gout and obesity himself, Dr Cheyne promoted vegetarianism and treated famous patients such as Samuel Richardson and Alexander Pope. 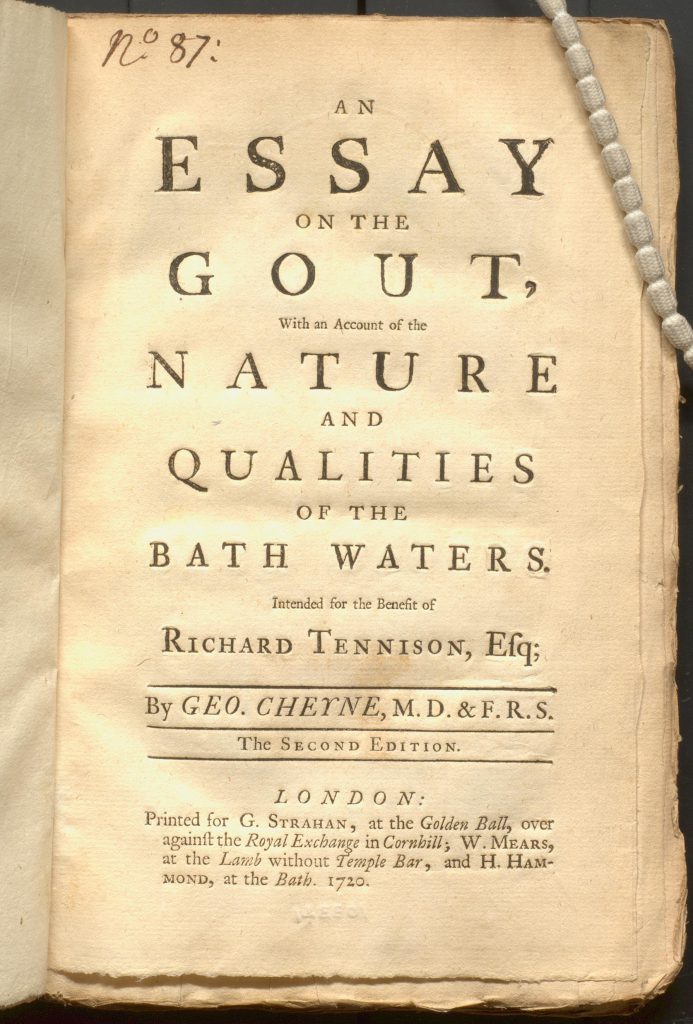 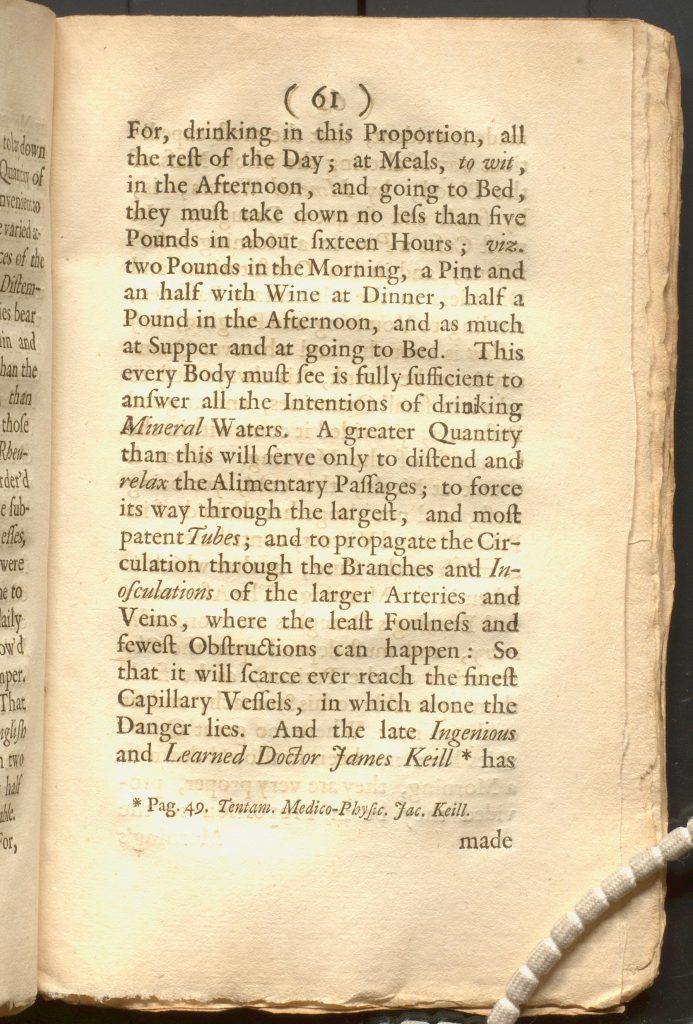 Home Gymnastics for the Well and the Sick

In the later 19th century the popularity of German-influenced “physical culture” led to emphasis on gymnastics in the USA and England. As part of this general trend, Home Gymnastics of the Well and the Sick  (1889) promoted exercises that were simple, without specialist apparatus, for people of varied ages. 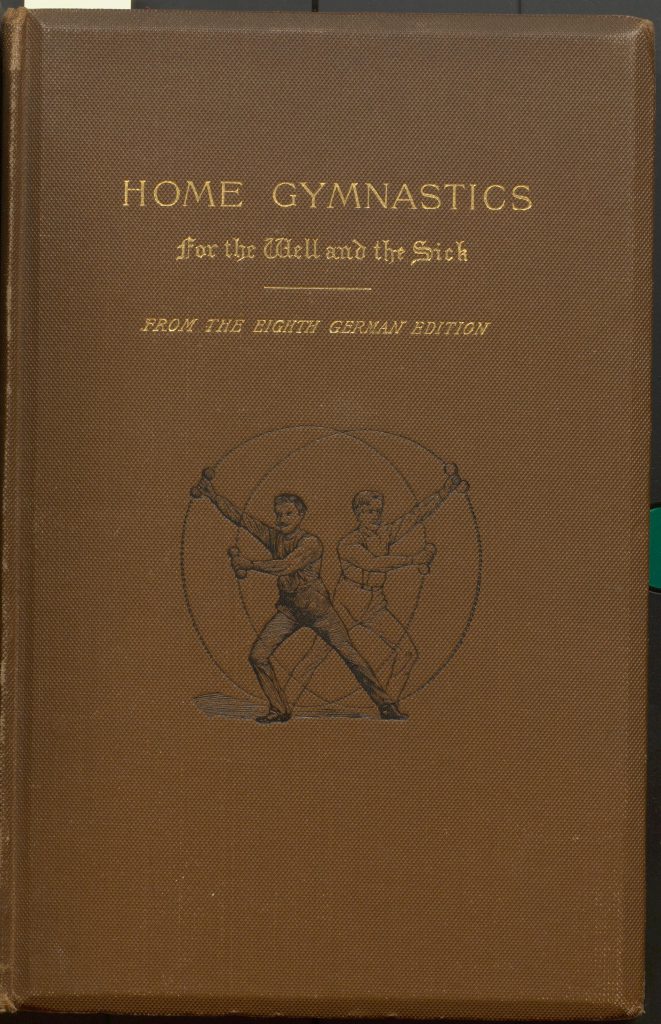 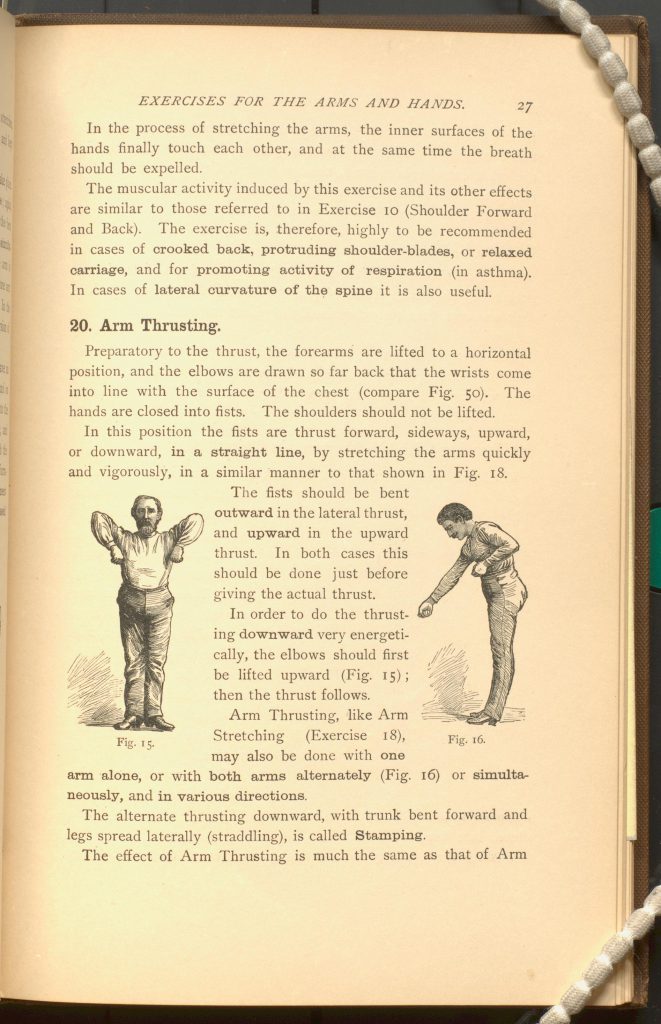 Instructions on how to dad dance – SPEC Children EVIII:257

As always, the items featured in this post are available to view in the Special Collections and Archives reading room. Please see our website for more information.