Beyond the books donated to the Liverpool Royal Institution by Benjamin Gibson, the LRI’s library collection was dominated by material printed in the 19th century, with a particular strength in the natural sciences – the library having been developed primarily as a resource to support the Institution’s Museum of Natural History. The Museum was the jewel in the crown of the Institution’s activities. The first catalogue, drawn up in 1826, boasted 2467 specimens of rocks and minerals, 99 mammals and 826 birds – most of which were obtained through gift or deposit.

Natural history books in the collection included works by some of the most important figures in the running of the Museum, including:

William Swainson (1789-1855), naturalist and artist, played an important role in organising the collections, as well as providing advice on their preservation. Swainson was best known for his illustrations, and the LRI library held a number of works illustrated by him:

Images from “Zoological illustrations, or, Original figures and descriptions of new, rare or interesting animals, chiefly selected from the classes of ornithology, entomology, and conchology, and arranged on the principles of Cuvier and other modern zoologists” by William Swainson (SPEC Y82.3.503-505).

Thomas Stewart Traill (1781-1862), was a physician and expert in medical jurisprudence. He nurtured a wide range of interests however, as evidenced in his being editor of the eighth edition of the Encyclopedia Britannica. Traill became Keeper of the Museum in 1822, and was responsible for the creation of the first catalogue of its holdings (SPEC R.5.24/B).

A second Liverpool physician, Joseph Dickinson (d. 1865) made a number of important gifts of botanical specimens to the Museum. Dickinson was also a lecturer in medicine and botany at the Liverpool Medical School, and wrote a work entitled The Flora of Liverpool (SPEC R.5.52/B).

And finally, one of William Roscoe’s many interests was botany. As well as being a key figure in the founding of the LRI, he was also instrumental in the creation of Liverpool Botanic Garden (later Wavertree Botanic Garden). In 1828 he wrote Monandrian Plants of the Order Scitamineae: Chiefly Drawn from Living Specimens in the Botanical Gardens at Liverpool:

At the heart of the Liverpool Royal Institution’s library was a collection of books bequeathed by the sculptor and antiquary Benjamin Gibson (1811?-1851). Indeed, at around 170 volumes in total, Gibson’s donation represented almost half of the total collection.

Benjamin Gibson was born in Conwy, Wales, and grew up in Liverpool. His early sculptures were displayed at various locations around the city, including at the Academy of the Liverpool Royal Institution. In 1836, after the death of his mother, Gibson moved from Liverpool to join his older brother – John Gibson (1790-1866) – in Rome. John had been forging a successful career there for nearly 20 years already. Having studied under the master Italian Neoclassical sculptor Antonio Cannova (1757-1822), he went on to run a bustling studio in the Via della Fontanella.

In Rome, Benjamin assisted his brother, as well as continuing to create his own works (many of which were commissioned by members of the LRI, and sent back to Liverpool). He also devoted a considerable part of his energies to buying books. Indeed, such was his bibliomania, on his death in 1851 John Gibson is said to have described Benjamin as more of a book collector than a sculptor.

An expert on Greek and Latin literature, Benjamin Gibson amassed a formidable collection Classical texts. Whilst particularly strong in Latin and Greek language and literature and in antiquities, Gibson’s books covered a great wide range of subject areas – from history to maths, through mythology and military science:

The vast majority of Gibson’s books date from before 1800, with nearly half of them printed during the 17th century. Gibson also owned 30 books printed in the 16th century – the earliest work in his collection being a 1532 printing of Giovanni Boccaccio’s (1313-1375) Peri genealogias deorvm (SPEC EP.D11).

A number of Gibson’s books have evidence of prior Roman owners. For example, three of his books bear the stamp “Biblioth: Corsinia vetus”. Founded by Pope Clement XII (1652-1740) – born Lorenzo Corsini – the Corsiniana family library was donated to Accademia Nazionale dei Lincei, a science academy in Rome, by his descendant Tommaso Corsini (1835-1919) in 1883. The result of this merger, the Biblioteca dell’Accademia Nazionale dei Lincei e Corsiniana, is still housed in the rather magnificent Palazzo Corsini.

Another three books are stamped “Libraria Colonna”, having belonged to the Colonna family, another papal noble family of Rome:

Indeed, Gibson’s books are rich in provenance, with previous owners from all over Europe. Other names associated with the collection include Spanish clergyman and intellectual, Jose Sáenz de Aguirre (1630-1699), Italian bishop and biologist Anton Felice Marsili (1651-1710) and French lawyer and journalist Jean-Jacques Lenoir-Laroche (1749-1825).

Introducing our latest newly catalogued collection – the books of the Liverpool Royal Institution (LRI). This is a substantial collection of over 300 titles, published between 1516 and 1887. The LRI books relate chiefly to the Institution’s natural history and art collections, but they are also rich in classical texts, and works of history and politics.

The library and archives, partly destroyed in the bombing of Liverpool in 1941, were transferred to University College, Liverpool in 1894. A “Hand List of Books and Pamphlets of the Liverpool Royal Institution kept at the Tate Library, University College, Liverpool” (Liverpool, 1894) records books transferred to the University, including Gould’s Birds of Australia and Benjamin Gibson’s 1851 bequest of 171 volumes (more on this in our next post). The 1894 transfer was commemorated by a bookplate designed by Robert Anning Bell. A surviving borrowers’ register shows loans made 1859-1893.

Liverpool Royal Institution was the brainchild of William Roscoe and friends, who published their detailed plan for its activities in 1814. Roscoe was the Chairman of its General Committee in 1814, its first President in 1822, and delivered the 80-page inaugural address at its opening, 25 November 1817.

Liverpool Royal Institution drew on the cultural impetus Roscoe and his circle gave Liverpool during  the late 18th century – founding the town’s Athenaeum, Literary and Philosophical Society, Lyceum (with the Liverpool Library), Liverpool Academy and Botanic Garden – and put it to the service of “promoting the increase and diffusion of Literature, Science and the Arts” (1). The 1814 plan provided for a School, Public Lectures, accommodation for Societies, Collections of Books, Art, and Natural History, a Laboratory and other Apparatus, and meeting rooms for the Proprietors, its financial backers.

Writing the LRI’s history in 1953, Henry Ormerod was struck by “how much of the intellectual life of nineteenth century Liverpool was centred in the Royal Institution, and how many of our modern institutions originated either as the direct creation of the Institution itself, or as guests within its walls” (2).

By the end of the 19th century as the LRI’s natural successors, particularly the Public Library and Museum and University College Liverpool, were founded and thriving, the LRI collections were dispersed and its activities curtailed. You can still find its legacy today in the Walker Art Gallery (paintings), Liverpool Museum (natural history), the Victoria Gallery & Museum (minerals), and in the University of Liverpool.

And the LRI archive and Library are both available via Special Collections and Archives, and include lists of subscribers and proprietors; committee minutes; correspondence; legal records; catalogues of the collections; records of gifts; visitors’ books; and financial records.

To celebrate the bicentenary of the Liverpool Royal Institution, opened by William Roscoe on 25 November 1817, an exhibition is on display at the Sydney Jones and Harold Cohen libraries until the end of the year.

In addition, a reading of selected passages from Roscoe’s 80-page opening address will take place in the School of the Arts Library between 3 and 5pm of the 100 year anniversary date, with a tour of the exhibition. The free public event is hosted by Eighteenth-century worlds. 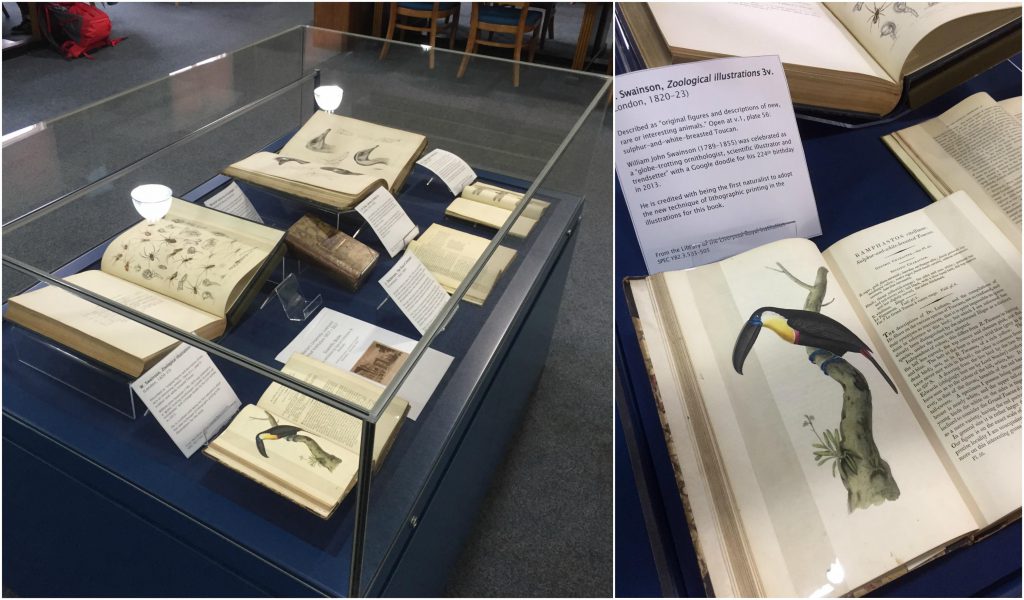 The display in the Harold Cohen cases, including the Toucan from within William Swainson’s Zoological Illustrations (1820) .

The Harold Cohen Library is showcasing scientific books from the Library of the Liverpool Royal Institution, including a selection of coloured plates of insects and birds which made use of the new technique of lithography. The plate of a toucan from the first volume of William Swainson’s Zoological Illustrations (1820; above image) recalls the Google doodle for Swainson’s (224th) birthday in 2013 (below image).

John Blackwall’s A History of the Spiders of Great Britain and Ireland (1861-1864) describes 300 spiders and illustrates 272 of them. It was the life’s work of the Manchester businessman, who retired to North Wales to complete it. The copy in the Liverpool Royal Institution Library was one of the first to be borrowed when rules changed to allow the fee-paying subscribers (“proprietors”) to take books home. The borrower, Rev. H. H. Higgins, had a professional interest, having arranged the invertebrate display in Liverpool’s Free Public Museum when it moved to William Brown Street. 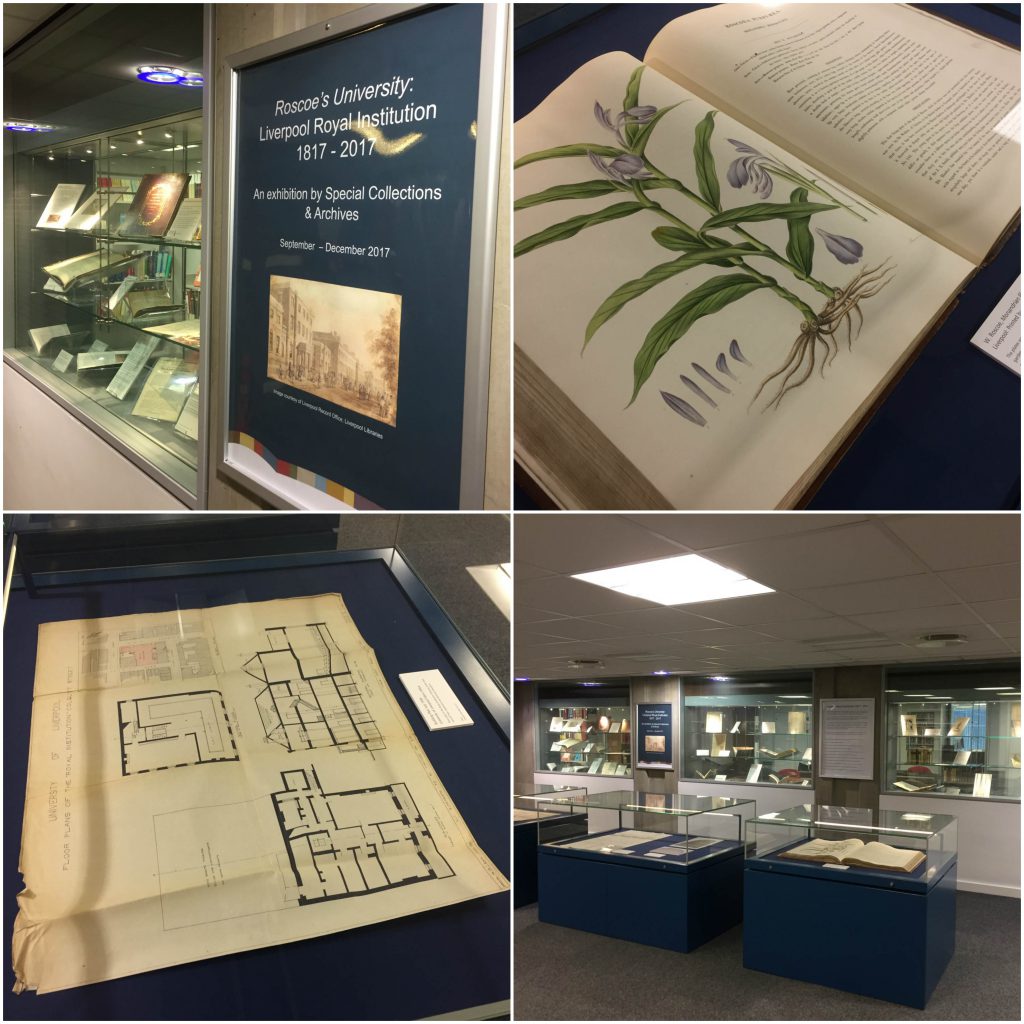