We’re delighted by the recent acquisition of a collection of papers formerly belonging to Helen Murray, secretary to philologist and Gypsy Lore Society (GLS) member Bernard Gilliat-Smith (1883-1974).The collection largely comprises correspondence and photographs, including letters from notable GLS members such as Dora Yates, R. A. Scott Macfie and Henry James Francis, and is a welcome addition to our GLS archive.

The earliest letter is from R. A. Scott Macfie (GLS Honorary Secretary, 1907-1914) to Gilliat-Smith, written on the day of the outbreak of the First World War; as well as containing personal news and reference to his work, Macfie comments on the ‘danger of another Balkan war – or worse.’ Macfie would experience this danger first-hand as a Regimental Quartermaster Sergeant in the Liverpool Scottish Regiment, receiving the Military Medal for gallantry in 1916. 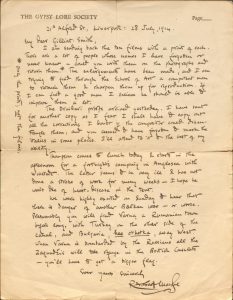 Letter to Bernard Gilliat-Smith from R. A. Scott Macfie on the eve of war.

The new acquisition also contains this print of a c.1899 photograph of Macfie, gifted by Dora Yates to Gilliat-Smith on his birthday (sent, as Yates explained in an accompanying note, as ‘I have nothing better to offer him’). 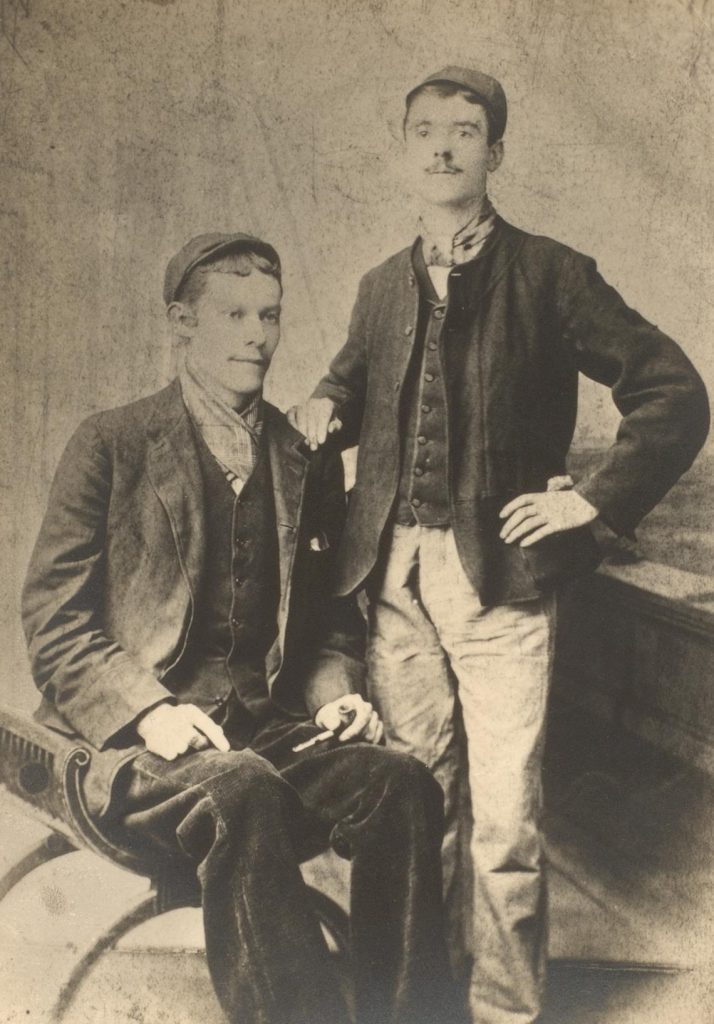 Macfie (left) is pictured alongside a fellow employee from Messrs Macfie & Sons, the sugar refinery business which had been run by his family in Liverpool since 1838.

Dora Yates (GLS Honorary Secretary from 1935) was a prolific correspondent and we are pleased to add more of her letters to our large extant collection, offering as they do great insight into the work of the GLS and the various personalities within the society. 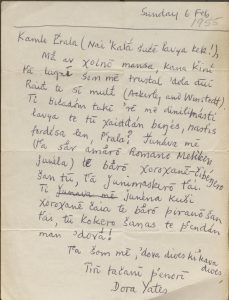 Letter to Bernard Gilliat-Smith from Dora Yates in Romani (the rest of her letters are in English).

A full catalogue of this new collection will soon be available online under the reference number GLS ASC/7.

Romany, Traveller and Gypsy histories are currently popular themes for exhibitions across Europe: Rights and Romance: Representing Gypsy Lives features at the Brotherton Gallery, Leeds; “…don’t forget the photos, it’s very important…” The National Socialist Persecution of Central German Sinti and Roma in Prague (due to be displayed at the Liverpool Central Library in May 2018); and the Mondes tsiganes: La fabrique des images display at the Musée de l’histoire de l’immigration in Paris. The latter two exhibitions feature material from the GLS collections held within SC&A.