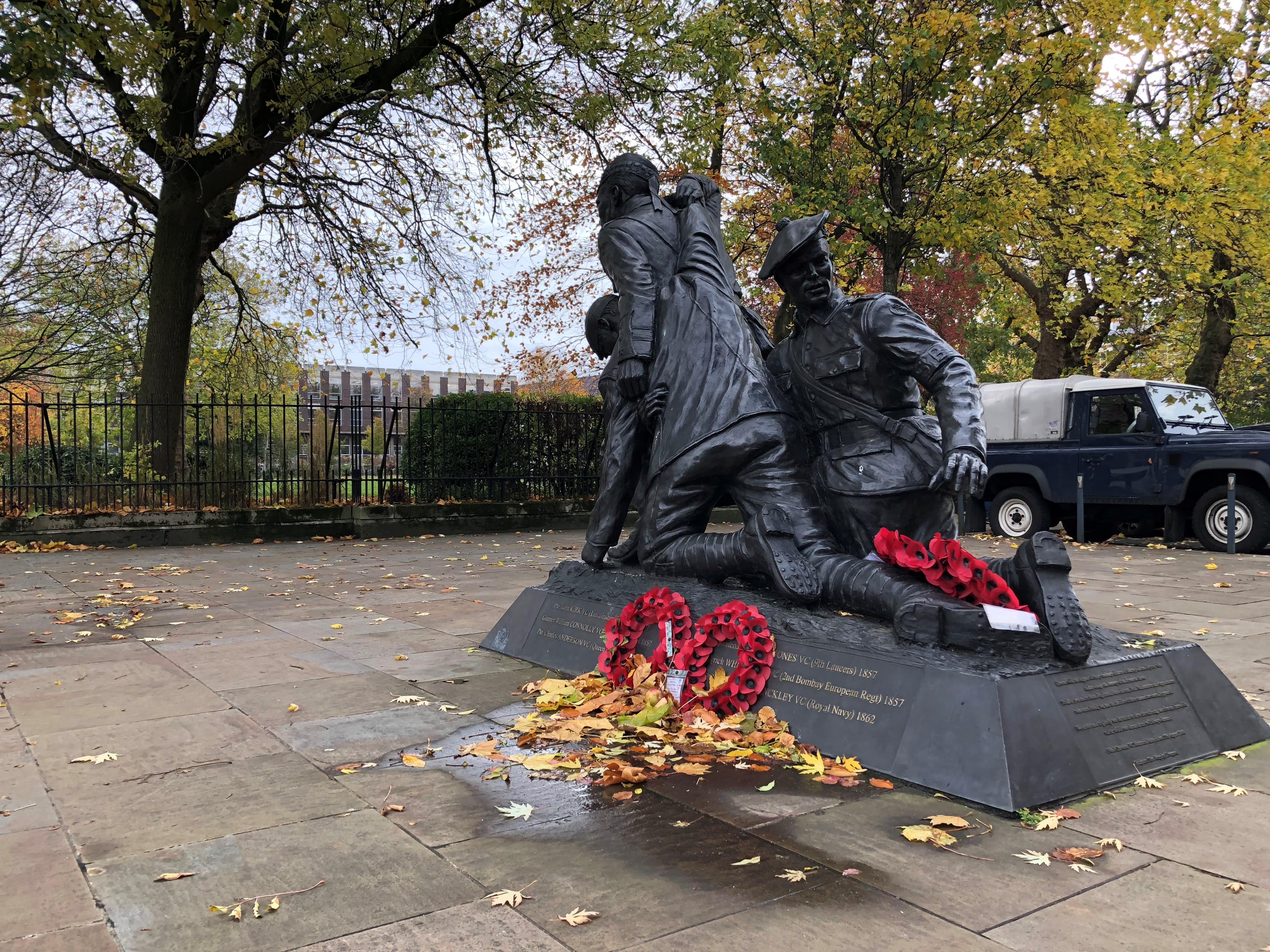 This Sunday marks both Remembrance Sunday and the centenary of Armistice Day, 100 years since the hostilities of the First World War were brought to an end.

Since August 4th 2014, 100 years since Britain declared war on Germany, we have been posting This week’s war, a series of excerpts from the collections detailing the war as it was, this week 100 years ago. To mark the Armistice centenary and to bring this series to an end, we will be reflecting on the end of war and where some of those mentioned over the last four years were in November 1918 and beyond.

In the 1918 diary of John Bruce Glasier [GP/2/1/25], who was a pioneer of the British Socialist movement and had been opposed to the war from the beginning, he expresses joy at the announcement of the Armistice. It appears that he may have written his entry for November 11th prior to hearing the news, and has added parts along the top and side of the page saying, ‘Great News, Peace Revolution’, and ‘Announced at noon today – Armistice signed. Peace!’. 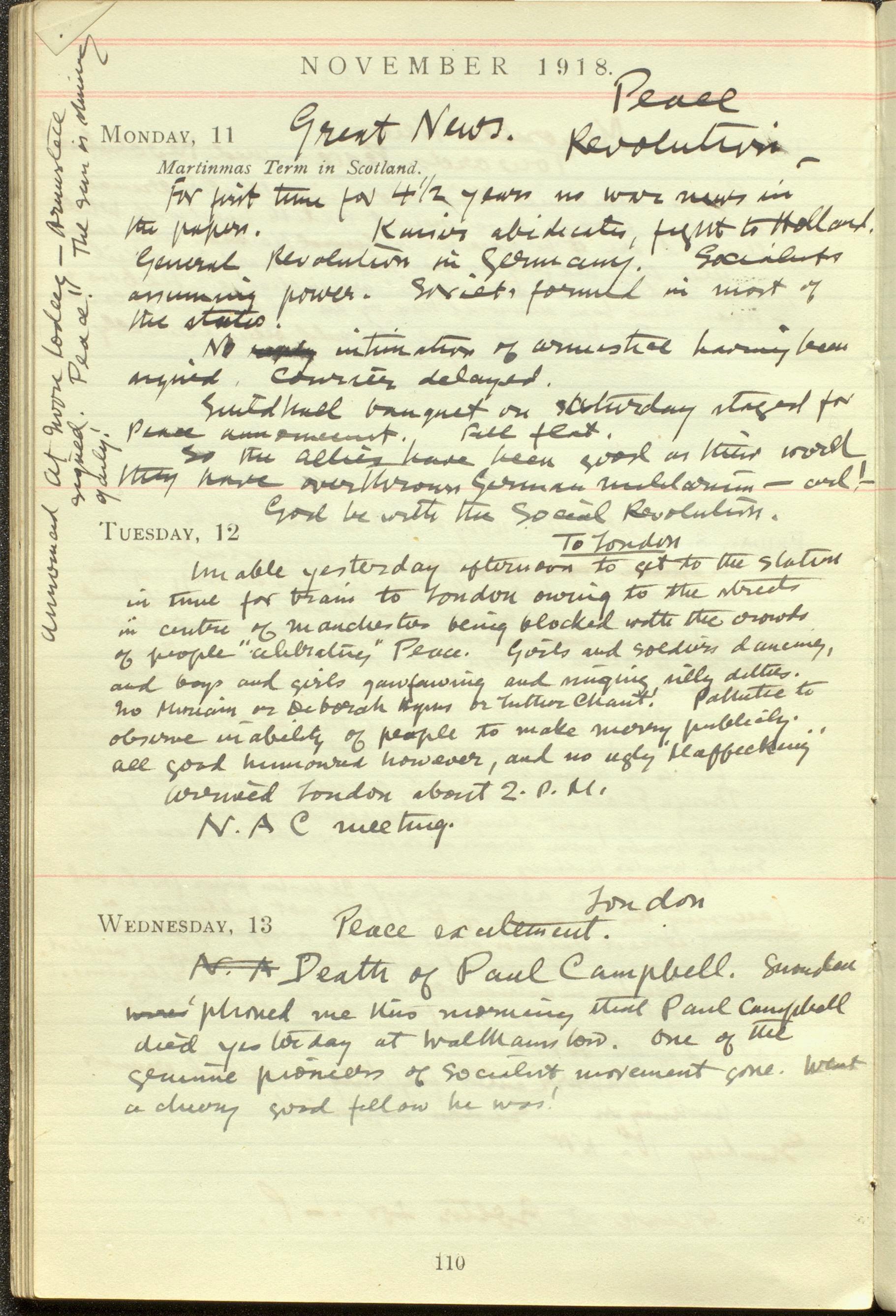 That afternoon Glasier found his plans to travel to London disrupted; he was unable to make his way to Manchester Station due to the streets being blocked with people gathering to celebrate the end of the war:

Girls and soldiers dancing, and boys and girls gawfawing and singing silly ditties. … All good humoured however.

As those at home began to celebrate and reflect on the end of the war, the cessation of hostilities meant that the long task of repatriating soldiers to their home countries could begin. Repatriating some of the millions of soldiers abroad in Europe began soon after the Armistice, and Cunard vessels were some of those transporting Allied troops before ‘the guns were hardly cool after roaring out their last bombardment of the war’ [D42/PR3/8/4 ‘To the American Legion Cunard’]. The December 1918 edition of Cunard Magazine (D42/PR5/22), produced for staff, reminds readers that their drive for socks for servicemen abroad continues:

We can now look forward to the day when further contributions will no longer be needed, but in the meantime, ladies, the boys still remain at the front – so please carry on.

It would take months for many to be returned home. J. H. Forshaw, an Architecture graduate of the University of Liverpool after the war, was in the Royal Engineers during the war and for a number of months following the war. War diaries from his papers [D113] describe the bridging and inspection work that he was carrying out with the Royal Engineers in France and Belgium until his dispersal on the 11th July 1919. On Armistice Day, he made a note of the announcement before carrying on with inspections work in the following days. 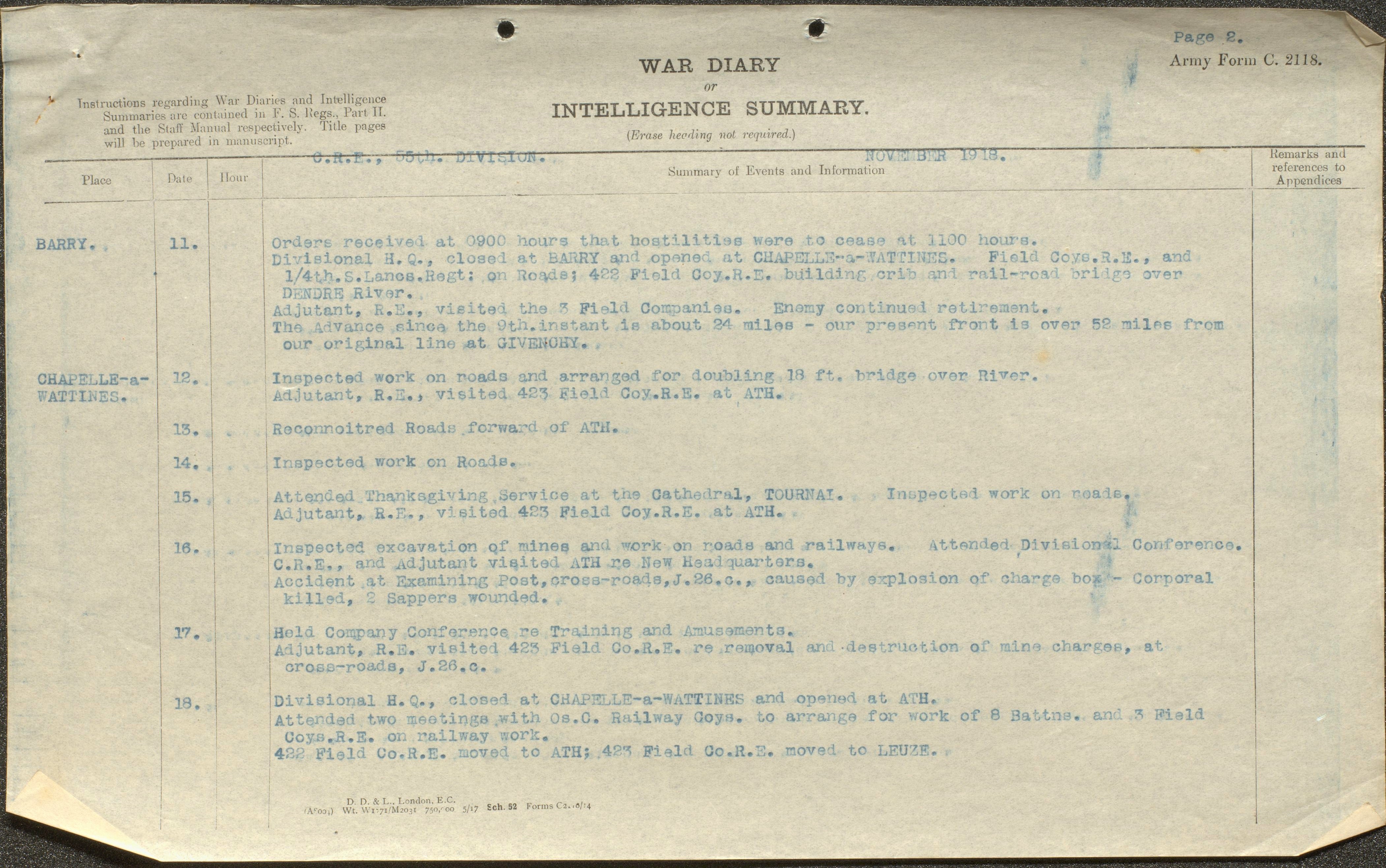 According to Forshaw’s dispersal certificate, he would leave his Unit on the 11th of July 1919 to return to Ormskirk. 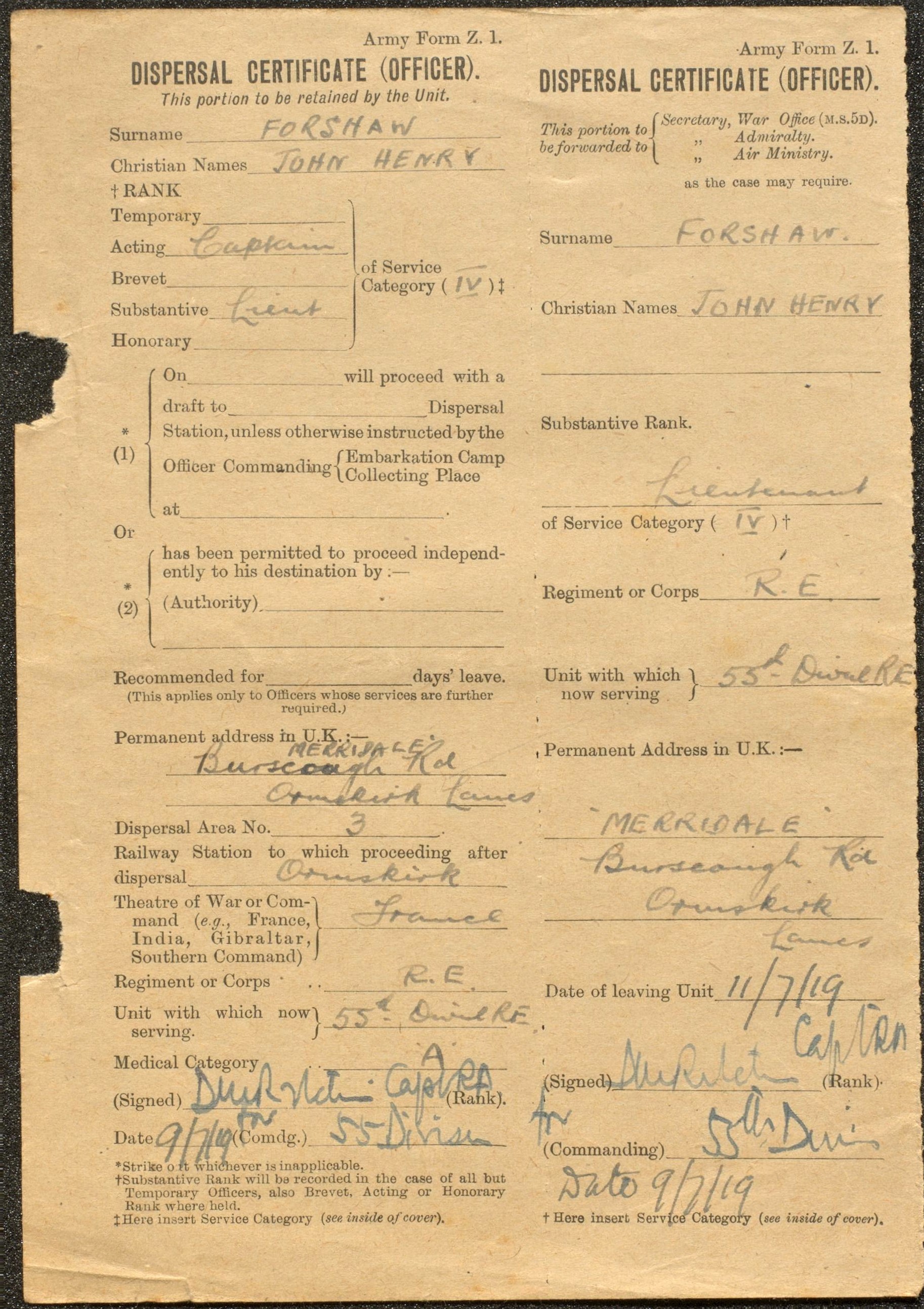 Of course, not all soldiers returned home from fighting, and Remembrance Day is dedicated to those who have served and those who were lost during the First World War and other conflicts. The end of the war appears to have been a time of complicated emotions for many; relief that it had ended but sorrow and grief for those who had been lost.

The January 1919 edition of Cunard Magazine [D42/PR5/23] includes a report of celebrations in Pittsburgh, Pennsylvania, on the announcement of Armistice, but also this reflection of feeling at the end of the war:

The end has come so suddenly that it is hard to realise, all at once, that the unspeakable horror is indeed over. … And now for the first time in four years, brave men are not being killed and maimed by thousands. It gives one a feeling of solemn gladness, that is akin to sorrow.

For many, the upcoming festive season would have been coloured with sorrow for those they had lost in the four years since the beginning of the war. This passage from the introduction to the December 1918 Cunard Magazine (D42/PR5/22) is perhaps, then, a fitting way to conclude This week’s war:

For the past four years it has unfortunately been impossible to indulge in our customary felicitations, but with the success of the Allied Arms we are now happily able to revert to our former practice. … It would be idle to attempt to overlook that to many a home the absence of dear ones who have made the supreme sacrifice will cause many a pang of sorrow and regret, but we trust that the kindly hand of time will help to soften the feeling of loss, while keeping ever sweet and fragrant the memory of those who have fallen. 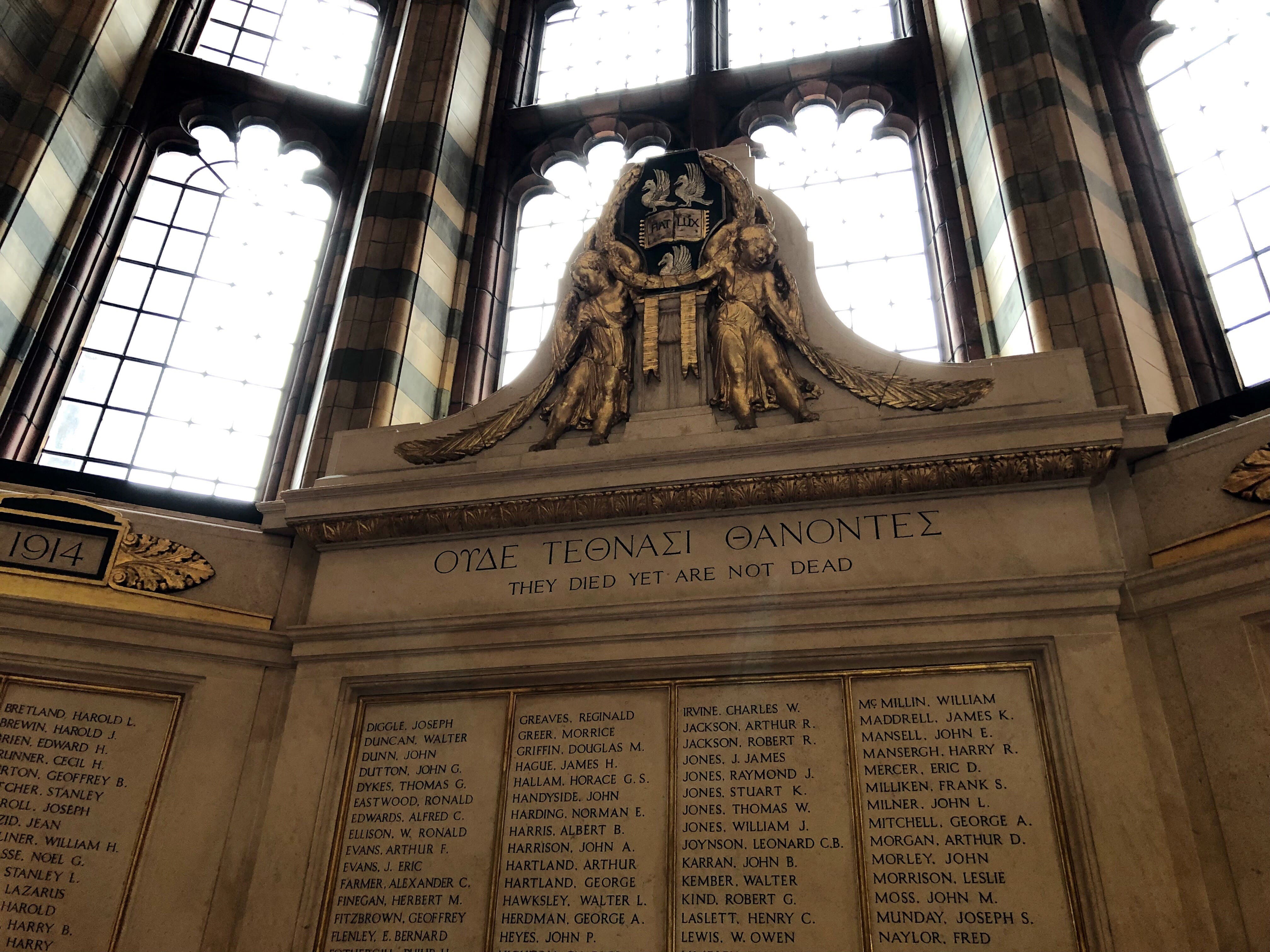 The University of Liverpool First World War Memorial, in the entrance hall of the Victoria Museum and Gallery