H is for Half-title

A half-title is a leaf that directly precedes the title-page proper and contains a title or short title, and perhaps the name of the author, or a volume number.

Given that the details recorded on a half-title are generally repeated, and elaborated upon, on the title-page which follows it, one might well wonder what purpose this extra leaf serves.

A favoured explanation* takes as its starting point the fact that, in the early printed book trade, the printing of the book and the binding of the book were two quite separate activities. Initially, printers would produce the pages of a text – the text-block – which they sold unbound. The text-block’s new owner would then have these pages bound into a volume according to their tastes and budget (or, in the case of a bookseller, the taste and budget of the customer they hoped to attract). To help protect the first page of the text-block from dirt and dust, it was customary for early printers to put a blank sheet on top of the unbound text-block.

Here it should also be noted that the very earliest printed books did not contain a title-page. The blank sheet, originally intended for protection, came to be marked with a ‘title’, then, in order to help printers to quickly differentiate one text-block from another. From here, this added sheet developed into the full title-page as we have come to know it; with publication details, and perhaps even some illustration, as well as author and title added to it.

But as this page became increasingly important in its own right, it became necessary to protect it from dirt and dust too, and so the process was repeated. A blank page, laid on top of the title-page to protect it from dirt and dust, had a short version of the title added to it to help with identification in increasingly busy printing houses and binderies, during the second half of the 17th century.

It is worth noting that there was arguably little clear impetus for this half-title leaf to be retained in the finished, bound version. Indeed, according to John Carter’s ABC for Book Collectors, binders removed these sheets more often than not – not just because they were inessential, but because waste paper of this sort could be sold back to the paper mills, creating an extra mode of income for bookbinders. This helps to explain why half-titles aren’t more common in early printed books.

In the example above, however, the printer has found a use for the extra paper, putting the verso of the half-title to good use as a space for advertising his wares: 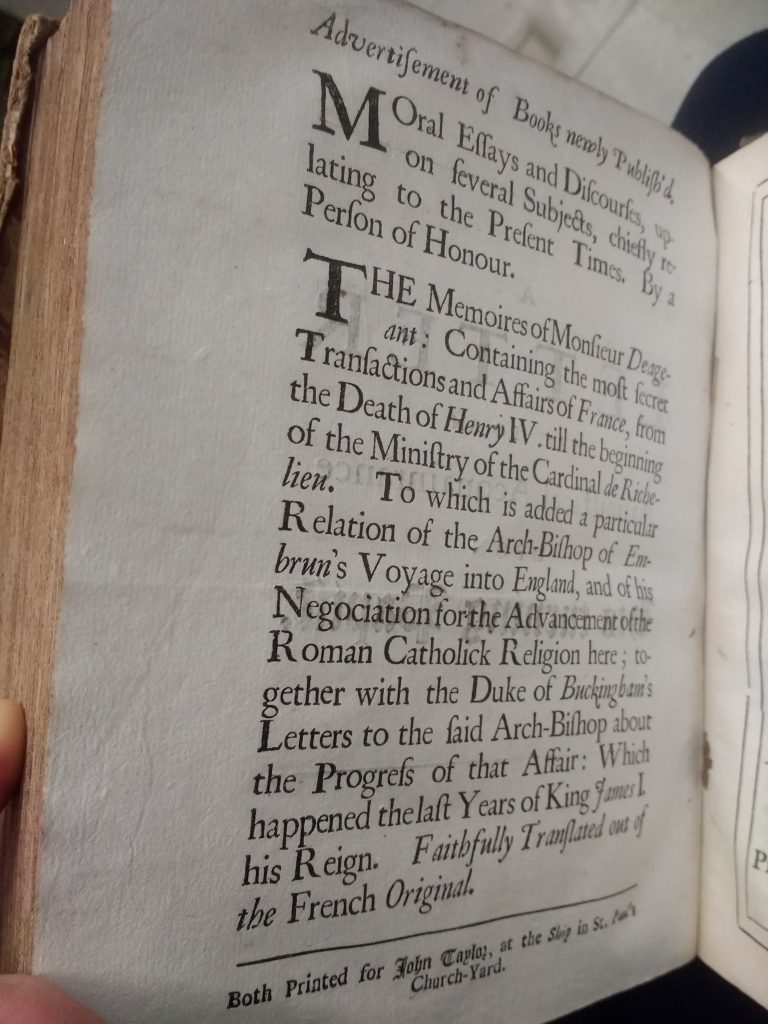 *This is the explanation provided by Philip Gaskell, in his renowned A new introduction to bibliography, for instance.